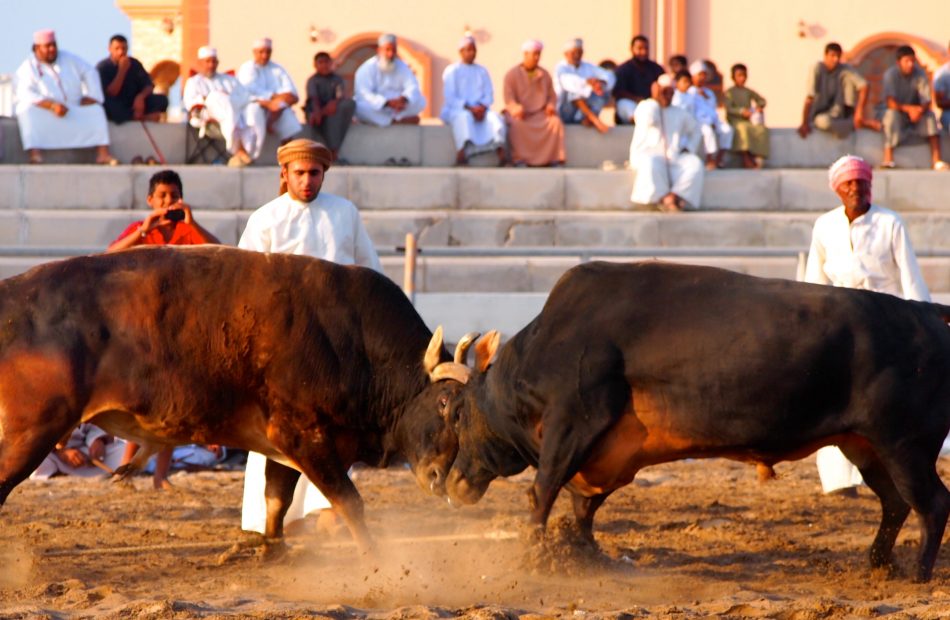 Bullfighting is a traditional Omani spectacle, passed down through the generations, taking place almost every other Friday in various places around the country, and I opted for the closest venue to Muscat – Barka.

Bullfighting, or bull butting Omani-style is a far cry from the Spanish equivalent. There aren’t any matadors and the Omani version is bloodless with little or no injury to the bulls. The battle comes to an end when one of the heavyweights backs down and flees the fight.

These bullfights are often impromptu and not advertised, so finding the exact location can be a challenge if you’re not in the know. Arriving at the site in Barka in the morning, I found a small dusty ring with sporadic concrete seating and no one else in sight. It turned out that I was way too early. The crowds started arriving in the afternoon, some bringing their own camping chairs to sit and watch the action.

As the owners were busy preparing their bulls for the fight, I turned my lens on the spectators. I was struck by a young local boy wearing a crisp white dishdasha with a pair of Aviator-style sunglasses that were slightly too large for his face, making him look like an Omani urban cowboy.

He had nerves of steel. He stood right next to one of the bulls as calm as you like, showing not the slightest fear of the powerful beast next to him who could have killed him with his giant horns or huge hooves. Brahmin bulls used in fighting can weigh up to 1,100kg and are rippling with muscles, so you can imagine the result of being trampled by one.

It turned out that the bull was owned by the youngster’s father, which perhaps explains why the boy and beast were so comfortable in each other’s company, having grown up together. Some of the fighting bulls are pampered family pets.

Dozens of fights take place throughout the day. Each one only lasts a couple of minutes, but there’s a great deal of pride at stake for the owners. The losing bull and his owner usually go home with a bruised ego.

Watching two powerful animals lock horns in a standoff of strength is an exhilarating experience. Such a show of physical power gets your own adrenaline flowing.

Meanwhile, a master of ceremonies was pacing the arena commentating on proceedings and cracking the occasional joke, keeping everyone entertained.

When the fight is on, handlers stand close by to supervise and keep the bulls under close supervision with a rope round one of the animal’s legs to ensure that they can’t break loose and run into the crowd. The system is not foolproof and occasionally the bulls are able to escape.

If you want an authentic Omani experience, book your seat at the next Barka bullfight.

HOW TO GET THERE

From Muscat, take the road to Barka. At the main roundabout in Barka, turn right towards the fort (it should be signposted) and follow the single road until it ends. Take a left and drive straight. Keep following the road and you’ll see the bullring. It’s best arrive around 2pm in the winter time. There’s no charge to watch.